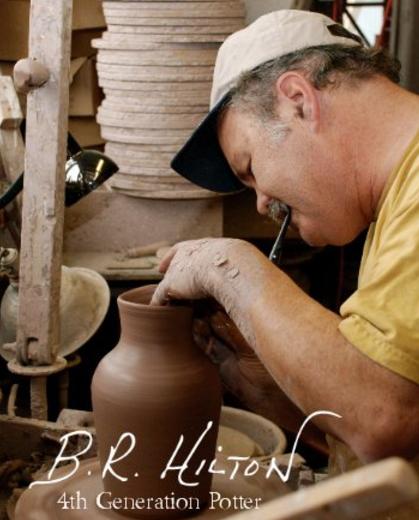 Boyd Robert Hilton was born in Catawba County, North Carolina in 1949. Raised in the center of the Catawba Valley pottery area of the Blackburn Community, he was influenced by the rich history of his family’s tradition.  B.R., also known as Bob Hilton, continues the traditions of excellence in pottery that began after John Wesley Hilton (1836-1923) returned from the Civil War. B.R. Hilton is the son of famed Catawba Valley potter Boyd Shuford Hilton (1916-1985) and grandson of Curtis Roland Hilton. (1875-1960)

B.R.’s own style continues to evolve.  His work is most evident with a blue edge that feathers out blending into the base glaze instead of a traditional hard line.  He uses this glazing method often referred to as “blue edge drippy” and   has multiple color variations including greens, browns, and even reds available.  Boyd Hilton, his father, produced blue edge ware with a translucent glaze and a unique blue rim decoration cascading down the pots, hence the term “blue edge drippy.”

B.R. his  and his father Boyd enjoyed doing shows together iin the late 1970's and early 1980's.  B.R. Hilton’s pottery is very distinctive and beautiful. He uses commercial stoneware clay as well as local hand dug Catawba County clay.  B.R. Hilton’s  pottery  is  reflective  of  his  past but guided by his own direction in style, shape, and color.

While Hilton pottery has always been functional and is produced for use by its owners, B.R. also creates pottery of a whimsical nature as demonstrated in his face jugs. B.R. turns throughout the year. His pottery shop is open to the public most days, and hosts an annual pottery sale and kiln opening the second Saturday in October each year.