The Hilton Pottery Gallery is open by appointment.  Located on the old Hilton Homeplace property, 5 generations of Catawba Valley, NC Hilton potters have called this farm home.  In fact, a Hilton potter has been turning pottery in the Catawba Valley since the end of the Civil War.  The pottery gallery was created from an old barn on the property known as the "chicken house".  Now filled with pottery from several Catawba Valley potters, the "chicken house" is the main presentation space for pieces available for purchase at the Hilton Homeplace.

Appointments available for shopping outside of these dates and times. Email us or Call for access to the Gallery. 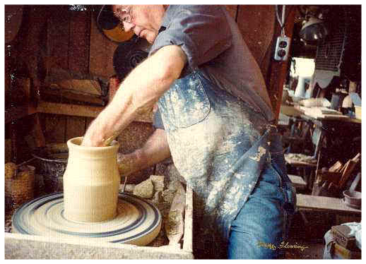 About the Hilton Homeplace

Boyd Shuford Hilton (1916-1985) continued the tradition of excellence established in the mid 1800's by John Wesley Hilton.  He signed his work "B. Hilton, Blackburn, NC" and would often write on the bottom of his pottery codes he used to maintain records of successes.  His shop, located on the Hilton Homeplace, is still in use today by his son, B.R. Hilton and granddaughter Heather Hilton.

John Wesley Helton established a pottery business in the mid 1800's after returning home at the conclusion of the civil war.  His three sons: Earnest Auburn (Auby), Shuford, and Claude Hilton returned to the traditional spelling of the surname and worked in and ran

with his son Boyd Robert Hilton until his passing in 1985.   Boyd Robert (also known as Bob or BR) along with his sister Linda Hilton Long own the C.R. Hilton Homeplace.  BR runs the Hilton Homeplace gallery located on the property and hosts an annual Pottery Sale conducted the second Saturday of October each year featuring local area Catawba Valley potters including his daughter 5th Generation potter Heather M. Hilton.

Pieces pictured above by B. Hilton, circa 1980 - 1985.  Paintings by Judy Petrie.  All photos courtesy of Tim Blackburn and owned by private collectors.

​  Curtis Rowland (CR), son of Robert Jehu Helton (John Wesley's brother) created pottery at the turn of the century working in North Wilkesboro with the Kennedy brothers.  In 1902 CR and his brother George Robert Hilton opened Hilton Pottery in Iredell County near Harmony and operated this location until 1906 when Auby Hilton took over and ran the business until 1909.  In 1909 Auby and his wife Maude returned to Catawba county and both turned Hilton pottery passing the tradition on to their daughter Ernestine who later became well known for her dolls (pictured below).

John Wesley's grandson, and Shuford's son, John A. Hilton, was a 3rd generation Hilton potter who continued the family heritage turning pottery and selling from the CR Hilton Homeplace until his passing in 2015.

After passing along the Hilton pottery business to Auby in 1906 Curtis Rowland turned as a journeyman potter locally and in 1908 he opened the Hiton Brothers country store and was a merchant the balance of his life.  CR's son Boyd Shuford Hilton became a 3rd generation Hilton potter who raised his family on the property and turned pottery along